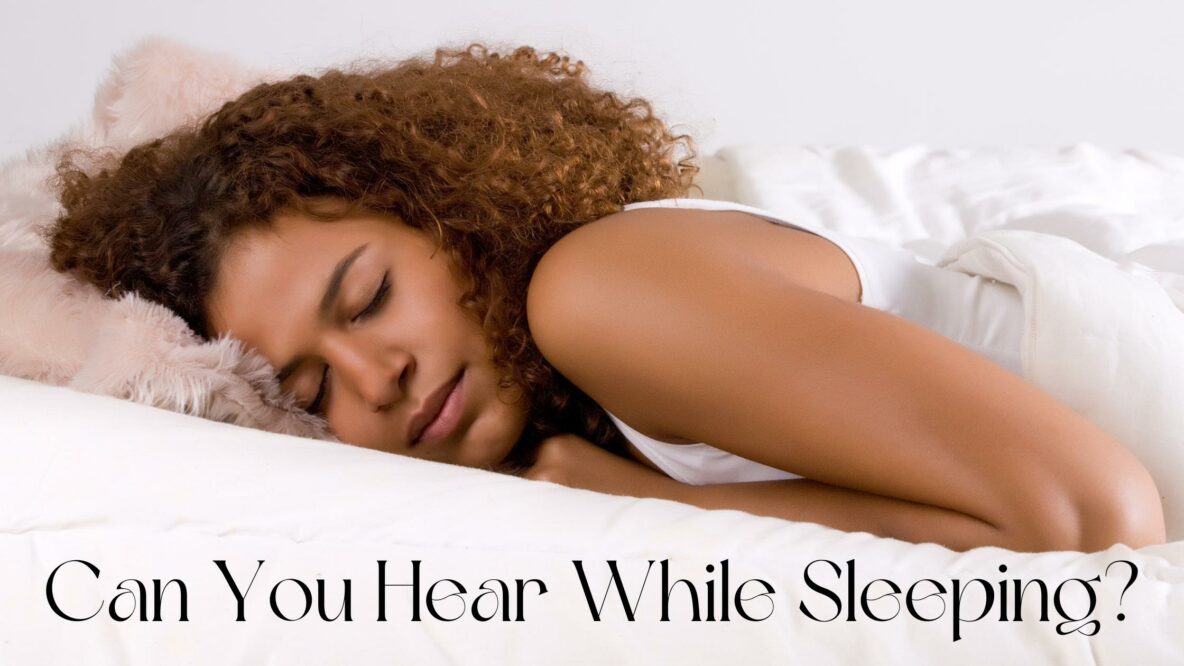 Have you ever jumped awake in the middle of the night after a loud noise outside? Even a quiet sound in the house or nearby your bed can be enough to rouse you from sleep. This phenomenon shows us that we do continue to have hearing ability while sleeping, but how much can we hear? Furthermore, how much does your brain process in the sound it hears? Can you remember things that you heard while sleeping, even if those sounds didn’t rouse you?

These questions have driven a world of research into the connection between sleep, hearing, and the very nature of consciousness. Our eyelids close when we sleep, blocking out visual sensations. And yet, all of our other senses can remain engaged during sleep. We don’t actively register the things we hear, smell, touch, or taste during sleep, but any one of these can be enough to rouse us from sleeping. Let’s take a look at some of the things that sleep and hearing research has discovered about our ability to hear under the cloak of sleep.

Sleep specialists know that we sleep in different ways on any given night. The stages of sleep are numbered one through four. The first stage is light sleep, and you are likely to be awakened at any moment. Stages two and three are said to become increasingly deep; the heart rate becomes slower, as does your breathing. The deepest sleep happens in stage three, and you are less likely to be awakened by sounds during this stage. You might have heard of REM (Rapid Eye Movement) sleep, the fourth stage, and this stage is essential to allowing us to feel rested when we wake up.

This stage of sleep is quite full of active cognition, including vivid dreams. You tend to breathe more quickly, and your eyes move beneath the surface of your eyelids, as well. This stage of sleep is essential for creative functioning during the day, and those with sleep disorders can suffer in the daytime hours if they are not able to reach this stage during the night. The ability to hear during sleep depends a lot on the stage of sleep in which we find ourselves.

Hearing During Stages One and Two

Some studies have measured our ability to hear and recollect what we hear during stages one and two of sleep. One study examined what happens during napping. The researchers allowed participants to nap lightly. They played recorded words during this light sleep and then roused the research subjects. If they had not yet reached deep sleep, they were usually able to recall something about what they heard, even though they were sleeping. However, if participants were allowed to reach deep sleep, it’s as if that stage of sleep wiped their memories clear of what they heard during stages one and two. When they woke up, they were not able to recall the words that were played during those first stages.

Hearing While Waking Up

If you’ve ever had a sound creep into your dreams, you might realize that your hearing ability remains engaged on some level, even during stage three deep sleep and stage four REM sleep. Though you might not be able to recall words or sounds that happened during these stages of sleep, some sounds will be sufficient to rouse you from sleep, particularly alarming sounds. Some sleepers even report that sounds can creep into their dreams immediately before waking. Whether that sound is an alarm clock or a loud bird outside the window, the sound can be incorporated into dreaming just before the person jumps awake.

The sounds before that moment might not be remembered for what they are, but they can take on a distorted version of the dream life indeed. Though we don’t know everything about hearing during sleep, research continues to seek these answers. Particularly for those who are hard of hearing or deaf, the lack of hearing ability makes it difficult for emergency sounds and fire alarms to rouse them. As we learn more about bodily functioning during sleep, these findings can be applied in life-saving emergency technology, as well.